The Castle of Lamia stands on the top of a rocky hill while it dominates and controls the Sperchios Valley up to Maliakos Bay as well as the passageway that leads to Thessaly through Orthris.
History  |  Archaeological site  | 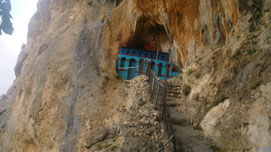 In the higher grounds of the fir-covered Oiti Mountain, stands an enormous cave that looks like a Cyclops's eye that is vigilant for his kingdom. It is the cave of Arsali (Saint Jerusalem) where the residents of Ypati, in her honour, formed an internal part into a church and celebrate her on the Thursday after the Orthodox Easter with festivities accorded to the local customs.
History  |  Monument  |

Just below the Castle of Lamia the Church of Panagia Archodiki was built. It is the second (after the Castle) archaeologically significant monument. It has taken its name by the prominent residents and lords of Lamia that were attending services there in the past.
Religion  |  Temple  |

The church of Saint Nikolaos, the old cathedral of Ypati, dates back to the 18-19th century.
Religion  |  Temple  |

The Church of Saint Sofia was built in the place of an older church, which most probably dates back to the Early Christian Period.
Religion  |  Temple  |
The Damasta Monastery, is dedicated to the Birth of the Virgin Mary, it is located in the municipal prefecture of Damasta in a magical landscape and it is a female monastery. Its early history is not known. The catholic (main church of the monastery) dates back to the 11th century with religious icons dating back to 1818.
Religion  |  Temple  |

The Folklore Museum of Fthiotida is part of the Museum Bureau of the corresponding intendancy of the Municipality of Lamia and was founded in 1984. It displays folklore exhibits of great value that help the visitor reconstruct the picture of the goods and of the daily routine in the pre-industrial society.
Folklore  |  Museum  |

Fratzomylos is a building that is a cultural heritage landmark. Through the way it was built as well as its architecture, the visitor can easily discern the historical features of Watermills in Greece.
Folklore  |  Watermill  |

The particular spot is the place where the Turks stopped their advance in 1897 during the Greek-Turkish War.
History  |  Monument  |

Opposite the contemporary Leonidas' Memorial stands a low hill that has been identified with Kolonus where the final phase of the Battle of Thermopylae took place. According to Herodotus' narration those who died fighting in the battle of Thermopylae were buried. In their honour a lion made of stone and three plain monuments were erected. Today on the top of the hill appears to be a representation of the epigram of Simonides of Ceos.
History  |  Archaeological site  |

The main railway station of Lamia is located in the southern part of th city. It is serving passengers moving to/from Stilida and Leianokladi in a daily-basis.
History  |  Building  |